Posted in From the Shoebox by: INTOTO
Share this on WhatsApp

What’s better than a superb performance by a talented actress? Well, it’s two marvelous performances in the same film! The super-success of Tanu Weds Manu Returns proves that the audience loves heroine-centric films, and a double-role is an added treat. As the bratty Tanu and the Haryanavi student-athlete Kusum, Kangana Ranaut rocks both roles. Here, we present some of the best double roles enacted by heroines.

Probably the best and most entertaining double role every played by a Hindi film heroine! Hema Malini is super-entertaining as the gutsy Geeta, and the demure Seeta. While it is a treat to see Hema Malini slip in-and-out of the two characters, it gets even more fun when their identities are swapped!

The film had Sharmila playing a mother and daughter. While the heartbroken mother dies pining for her lover (Sanjeev Kumar), the daughter grows up to become a foul-mouthed prostitute. This double role required a lot out of the performer, and Tagore was masterful in both the complex roles.

Sridevi was superb as the docile Anju and the feisty Manju. No one can forget her dancing the taandav, unable to control her impulses on hearing classical music, and the frolicky ‘Kisi ke haath na aayegi yeh ladki’. Classic stuff.

Madhuri too played a mother-daughter dual role in Aasoo Bane Angaarey. The film trails the life of Usha (Madhuri) who is harassed by her in-laws. Madhuri Dixit was dependably superb in both the roles, despite the film’s loud storytelling. Incidentally, she also played a double role in Sangeet with Jackie Shroff. 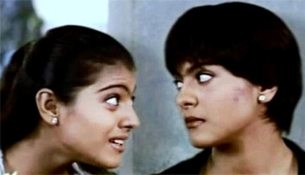 The film was interesting, as not only was the talented Kajol playing a double-role, it also had the unlikely character turning out to be the hero. In this Tanuja Chandra directed film, the feisty sister is brutally attacked and killed. It is then up to the shy, timid twin to take over and revenge her sister’s murder. Kajol was simply marvelous in both the roles. A bit of trivia: Kajol has also played a double role in Hameshaa and Kuch Khatti Kuch Meethi as well. One of the more contemporary double roles by a heroine, Deepika plays twin sisters Sakhi and Suzy in the movie. Since Suzy is a Chinese warrior, you get to see Deepika kill it in superb action scenes. Think sword-wielding, and attacking with a killer braid! The film didn’t do well, but kudos to Deepika for pulling off this physically challenging role of a martial arts expert!

The film was absurd but is on our list as it’s probably the only Hindi film where a heroine has played conjoined twins. Bipasha plays conjoined twins Sanjana and Anjana, who fall for the same guy. The identities change so often, you’re left scratching your head, much like the frazzled hero. But the film marks probably the only conjoined-twin double role played by a Hindi film heroine.